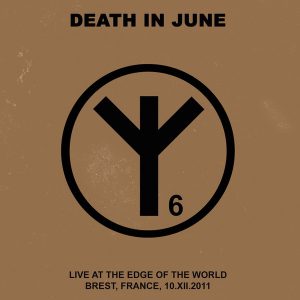 Live At The Edge Of The World
€13.00
Go to the store page
Audio is played partially for security reasons

Recorded on multitrack and remixed at the Edge Of The World, not far from the prison where Jean Genet conceived the idea of ”Querelle de Brest’, this recording, featuring John Murphy on drums, captures the return of Death In June to a French stage after 6 years of absence.

After a first edition on LP released in 2013 (and a reissue in 2017), this live recording was remixed again and released on CD+7″ with a new improved sound and an emphasis on John Murphy‘s stunning drumming.

Gatefold sleeve includes two grey vinyls and four postcards. Limited to 500 copies. First 100 copies come with free extra cd including a 9 minutes cut-up that was played as an intro to the Brest concert and is otherwise only available on the DVD during the running of the Photo Galleries.

Certainly the most complete collection of Death In June songs on one single release.

Double LP in a gatefold cover and with light grey vinyl (while the first release was on darker grey vinyl). It contains the same tracklist as the original release and slightly reworked artwork, but comes without any insert.

And for the first time on CD, presented in a 7” gatefold cover with a bonus blue/grey 7” vinyl.

The CD includes the full setlist ; the 7” includes the encores and the “Melange” cut-up that was played as an intro to the concert (which was previously only available on the bonus CD of the first 100 copies of the initial 2013 2LP release).

For this CD edition, the whole concert has been completely remixed and remastered from the original multitrack recording of the concert. It is a diﬀerent mix than on the 2LP.

Available from www.steelwork.fr and your usual good stockists.

0 items
Scroll back to top
DEATH IN JUNE - OFFICIAL DOWNLOADS